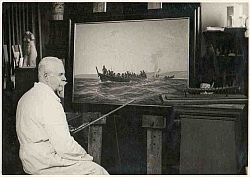 Alexander Kircher was born in 1867 in Trieste, part of the Austrian-Hapsburg Empire from 1382 till 1918. He was obsessed by warships and the sea, but due to an injury to his foot could not enter the Austrian Navy. In 1881 he decided for career as a painter of seacapes and entered the Academy in Berlin. His main teachers were Hans Fredrik Gude and Hermann Eschke. Kircher became famous in his field and became Germany’s leading painter of ships and seascapes.

This painting depicts the arrival of the of the Spanish king Alfonso XIII in Stockholm in September 1928 on a royal visit to Sweden. Alfonso boarded the royal Swedis barge Wasaorden, which was built in 1923, based on the drawings for the original barge of 1775, by J. Neuendorff. Several parts of the old barge were included into the new one.