You are here: Home1 / Globes2 / The Blaeu Dynastie

Willem Jansz. Blaeu (Uitgeest or Alkmaar, 1571 – Amsterdam, 1638) was a world famous Dutch cartographer and globe maker. The Dutch poet Joost van den Vondel, a personal friend, wrote about him:”He doesn’t serve you a festive repast of cakes or marzipan, … , but maps, protractors, astrolabia and globes, hollow at the inside and curved from the outside, painted with figures of marvellous madness. He publishes books for which sailors owe him their gratitude: he sounds the shallows and warns against sand banks, wide inlets and tortuous bays…””

Willem Jansz. (the z. stands for zoon, son) was born the son of a prosperous anabaptist tradesman. At first he worked at his grandfather’s, Cornelis Hooft, who was in the herring trade in Amsterdam and had married Willem’s cousin. But young Willem was more interested in a scientific career. Between 1594 and 1596 he moved to Denmark to work for the famous Danish astronomer/alchemist Tycho Brahe in Brahe’s royally funded observatory Uranienborg, also known as Sjterneborg, on the island of Hven in the Øresund.

Tycho Brahe and Uranienborg, called after
Urania, the Muse of astronomy
Astrology, astronomy and alchemy at that time were still intertwined and would be for many years to come: Isaac Newton for instance was a well known alchemist. Willem Jansz. worked with Brahe for about half a year, till May 21, 1596. There he was taught to make the instruments and the globes that in later years brought him his great fame. His relationship towards Brahe is not exactly known; he certainly was one of Brahe’s pupils, but if he had a subaltern position as amanuensis or a more friendly one is not clear. One thing however is. Down-to-earth as he was Willem Jansz. never did show much interest in alchemy nor astrology, as befitted a citizen of the newly born, booming and very down-to-earth Dutch Republic.

Brahe himself was the first European scientist who extensively observed and described a supernova, in 1572, proving that the universe was changeable and not a fixed creation. After a hefty quarrel about money with the new Danish king Christian IV he accepted an invitation by the Hapsburg emperor Rudolph II to come Prague. His assistent there was Johannes Kepler who later used Brahe’s observations to formulate his famous laws, the same laws on which the planetarium Zuylenburgh is based. Willem Jansz. knew what he did when he left for Denmark.

Back in the Netherlands he first lived in Alkmaar, but in November 1599 he bought a piece of land on the Lastage in Amsterdam. From his new home he had a daily view of the ships and the harbour and was constantly in touch with the helmsmen, captains and sailors who told him their newest discoveries and findings. He concentrated himself on the making of globes and seamaps and his first globe appeared in 1599. Very soon he acquired an enormous reputation in that field, no cartographer in the world could equal him.

He did not take on the name Blaeu (Caesius in Latin) till 1621. The name refers to his grandfather’s signboard, a silver human foot on a blue field. Having become rich he first moved to a house called The Gilded Sun Dial (De Vergulde Sonnewijser) on the Damrak and in 1637 to the freshly dug Bloemgracht, next to the house The Broomsweep (“naest de Cleerbesem”).

His first atlas was published in 1630, with 60 maps and in four languages, Dutch, German, French and Latin. In 1633 his great abilities brought him the appointment of official cartographer of the Dutch East India Company and, together with his collegue C.J. Lastman, he became the examinator of the EIC captains and helmsmen. He died the year after he had moved to the Bloemgracht and was buried on October 21st, 1638, in the newly built Nieuwe Kerk on the Prinsengracht in Amsterdam. The attendance was overwhelming, the city almost came to a standstill. 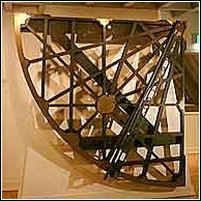 Adriaan Metius in his treatise about the astrolabium depicted one made by Blaeu in 1614 and also one of Blaeu’s planispheres. Blaeu himself used his instruments to make personal observations, measuring longitudes for instance. He also must have made telluria and planetaria for his demonstrations. Unfortunately we lack any descriptions, but Blaeu’s contemporary the French astronomer-mathematician Gassendi writes about “a very beautiful sphere…made according to Copernicus’s system. Even the pope, if he saw it, could not but agree with it.” (Epistolae, 1658).

The big problem which Blaeu and his seafaring contemporaries wrestled with was the calculation of the degree of longitude at sea, so one could exactly fix the position of a ship. In 1533 Jemme Reinersz from Dokkum in the province of Friesland and better known as Gemma Frisius (December 9, 1508 – May 25, 1555), himself an excellent instrument maker whose work set an example to Tycho Brahe,

invented a new system of triangulation that is still in use. Frisius himself too made maps and globes.

His pupil Gerardus Mercator [the Mercator projection!] would even become one of the most famous cartographers ever.
Around 1550 Frisius was the first to come up with the idea that a very accurate clock would solve the longitudinal problem. The great Dutch physicist and mathematician Christiaan Huygens attacked the problem a century later. He invented the pendulum clock which became the mechanical basis of Planetarium Zuylenburgh. His clock was a big leap in the right direction.

But the solution only came with the extremely accurate and seafaring clocks invented in England by John Harrison in the second half of the 18th century. His beautiful clocks met with so much unbelief and with an almost unsurmountable distrust in British naval circles that it took years plus judicial steps before Harrison actually could lay his hands on the huge money prize Parliament had promised for the solution of the longitudinal problem. Fear that Harrison’s invention could fall into the hands of ennemies was one of the reasons the Royal Navy hesitated to actually use the clock, its brilliant performance notwithstanding…

Willem Jansz. Blaeu wasn’t only a cartographer, he was also a publisher, publishing the books of major Dutch luminaries like his cousin P.C. Hooft and like Roemer Visscher, Adriaan Metius, Vondel, Descartes, Snellius, Barlaeus, Hugo Grotius and Vossius, in short the liberal minded intellectual and artistic elite of his days. Blaeu was married to Maritgen Cornelisdaughter from Uitgeest and had seven children of which the eldest, dr. Joan Blaeu (Alkmaar, Sept. 23, 1596 – Amsterdam, May 28, 1673) helped him in his work from 1631 onwards. About Joan Blaeu’s education not much more is known than that he studied at the Leiden faculty of law, where he got a doctorate in 1620 and that in 1623 he studied at the university of Padua, at that time one of the best or maybe even the best in Europe. Joan married Geertruid Vermeulen. They had six children and the 1631 edition of Blaeu’s Atlantis Appendix shows that he had entered his father’s business.

After Willem Jansz. death in 1638 Joan and his younger brother Cornelis continued the firm. Willem, the second son of Blaeu senior married the handsome widow of Gillis Claesz. de Hondecoeter and took care of the foundry and the warehouse on the Bloemgracht. When Cornelis died in 1650, Joan continued the business alone. In 1651 he became member of Amsterdam’s city council and later a city alderman. In 1658 the EIC appointed him examinator for their captains and helmsmen, like his father had been before.

On February 23, 1672 the second workshop of the Blaeus, established six years earlier in the former Latin school at the Gravenstraat, since then known as Blaeu court, was completey destroyed by fire. Jan Van Der Heyden, the inventor of the fire engine, extensively described the causes and the irreparable damage. Engravings, books, printing paper, printing presses, everything in the building was lost. Fortunately the shop at the Rokin and the other workshop at the Bloemgracht stayed in business. In that Year of Disaster 1672, when France, England, Sweden and the German bishops of Cologne and Munster declared war on the Dutch Republic and Louis XIV invaded it with his armies, Blaeu also lost his seat in Amsterdam’s city council. Prince William III of Orange was declared stadtholder to save the Republic, which indeed he did becoming king of Britain in the process, and like many prominent Amsterdam families the Blaeus weren’t Orangists. Joan Blaeu died the following year at the age of 76 and was buried in the Westerkerk near to his father. 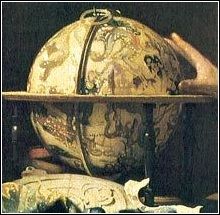 Joan Blaeu’s two sons Joan jr. (1650-1712) and Pieter (1637-1706) continued the printing business. Their mother started to sell off the by then world famous inventory of the shop. The last sale took place in 1677 and the shop itself was sold the following year. In 1684 the brothers Blaeu went into business with four other publishers of catholic liturgical works.

Joan Blaeu jr. became a member of the City Council in 1690. Two years later he moved to the prestigious Herengracht, number 541. In 1698 the workplace at the Bloemgracht closed. Part of the etchings were acquired by Johannes Van Ceulen, the master instrument maker from The Hague who had made Christiaan Huygens’s planetarium. Van Ceulen remastered Blaeu’s maps and republished them. In 1704 Joan Blaeu jr. became one the directors of the EIC. In 1708 he left the publisher’s guild and stopped all his publishing activities. That ended more than a century of fabulous contributions of the Blaeu family to cartography and science. It was just as the great North-African social historian Ibn Khaldûn had said three centuries earlier: what the father gains the son maintains and the grandsons will start wasting… The Dutch Golden Age was at its end and what the Dutch scoffingly call the Age of the Periwigs had started. 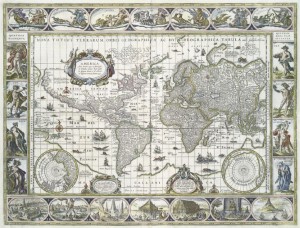 Much of the work of Blaeu and his son has been digitalised and can be found on the internet. For instance, click here to view Blaeu’s city maps in the archives of the University of Amsterdam.