A short history of the Dutch clock

May be we must leave our romanticized preconception of ‘eureca-like’, out of the blue inventions by solitary hermits gazing at swinging candelabras. To me it seems that Huygens was much more of a modern scientist. He read proceedings by fellow-researchers, traveling abroad to learn about new concepts, combined and perfected components that already existed, and was interested in market monopoly and earning credit from it. In the end Huygens obtained fellowships of both the Royal Society (1663) and the French Académie des Sciences in the year of the great London fire (1666). As an educator I look forward to a Dutch broadcasting company making a dramatized documentary television series for a larger audience, on the life and work of Christiaan Huygens, in the vein of the outstanding Longitude film or documentary.

It was the Frisian mathematician Gemma Frisius, who in 1530, in his De principiis astronomiae et cosmographiae (On the principles of astronomy and cosmography) proposed for the first time the use of an accurate timekeeper for determining longitude at sea. The Netherlands and Great Britain, both being seafaring nations, shared an essential interest in this matter, as they did in practical science in general and in trade. In 1627 the Dutch government set a reward for a functioning marine timekeeper for determining longitude. Huygens, like the eighteenth century English instruments maker and one time Leyden based Henry Sully, designed maritime timekeepers. Unfortunately neither the prototypes after Huygens by Jan van Call, Johannes van Ceulen, Severijn Oosterwijck and Isaac Thuret, nor the one by Sully lived up to the expectations. It needed the persistent life’s work of a John Harrison. However Huygens’balance spring did turn out to be the crucial element for all movable clocks and watches.

To return to Salomon Coster, the Boerhaave Museum in Leyden has his oldest signed and dated Hague pendulum clock of 1657, depicted in Antiquarian Horology of June 1954. Other examples are on display in the Chicago Museum for Science and Industry and the museum in Zaandam (Figs 2-5), while further examples exist in the Science Museum London and the Vehmeyer collection. It must have been a similar clock Coster sent to Ferdinand II de’ Medici in Florence in the same year. Next to Van Call, Coster was the first clockmaker granted the privilege (see Fig. 3) of applying Huygens pendulum system. He also adapted the turret clocks of the church at Scheveningen and the Utrecht Dom to work with a pendulum.

Other clockmakers working for Huygens were Severijn Oosterwijck, Johannes van Ceulen, Pieter Visbagh and the French clockmakers Isaac Thuret and Claude Pascal. Hague clocks by all of these makers exist in the Vehmeyer collection.

The museum in Zaandam also shows an early Hague clock (courtesy of the Boom-Time Foundation) signed by Severijn Oosterwijck, who also manufactured microscopes for Huygens and was the initiator of the Hague clockmakersguild in 1688. For the president of the Royal Society, William Brouncker, he manufactured the oldest known timekeeper with a seconds hand, dated 1663 which is now on display in the Museum of Science and Industry, Chicago. The Boerhaave Museum in Leyden preserves a rather similar early wall clock, showing hours, minutes and seconds, manufactured for Huygens by Isaac Thuret a Paris, c. 1670. Both clocks are more or less identical with the design in Huygens’ ‘Horologium Oscillatorium’ of 1673.

Johannes van Ceulen, another member of the Hague clockmakers guild, is best remembered for his Huygens-planetarium with balance spring of 1682 in the same museum of the History of Science in Leyden, and depicted in Antiquarian Horology of March 1955 and in H.A. Lloyd’s Collector’s Dictionary of Clocks of 1964. He also manufactured small drum-shaped marine watches with balance spring, suspended according to the system of Giralomo Cardono, examples exist in the Hessisches Landesmuseum in Kassel (Germany) and the Vehmeyer collection. Hague clocks by this productive craftsman are on display in the Boerhaave Museum, the museums in Schoonhoven and Kassel, the Frederiksborg Museum in Hillerod (Denmark) and of cause in the Science Museum London, which shows much resemblance to an unsigned Hague clock with later painted scene, owned by the Boom-Time Foundation and exhibited in Zaandam. 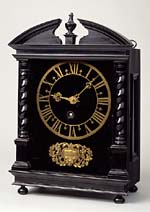 fig. 6. A later example of a Hague clock by Pieter Visbagh, c. 1685, Museum of the Dutch Clock, Zaandam. 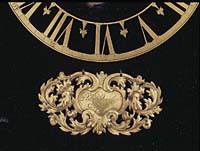 fig. 7. Signature plaque of the Hague clock by Pieter Visbagh.
(click on image to enlarge)

The fourth great Dutch Huygens collaborator was Pieter Visbagh, co-founder and first Deacon of the Hague clockmakers guild. Hague clocks of his can be seen at Hofwijck Castle (where Huygens lived) near The Hague, the Boerhaave Museum in Leyden, the Amsterdam Rijksmuseum, the Guildhall in London, the German National Museum in Munich and the museum in Zaandam (Figs 6-8). An exceptional example is his clock with a handsome painted face by Cornelis van Poelenburgh, portrayed on the cover of the issue of Antiquarian Horology of December 1969 and in the book by Dr Plomp some ten years later. The Hague clock by Visbagh in the Amsterdam Rijksmuseum is supposed to have been owned by Michiel de Ruyter, an admiral of the Dutch republic who invaded the Thames near Chatham and took the flag-ship ‘The Royal Oak’ during the Anglo-Dutch sea wars. 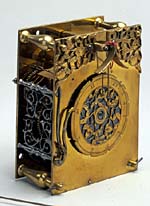 fig. 8. Hague clock by Pieter Visbagh, view of the striking movement, with fretted and decorated back cock, countwheel and iron striking ‘gate’.
(click on image to enlarge)

The spring-driven Hague clocks with their delicate bob pendulums swinging between cycloidal cheeks have severe black cases in modest rectangular or classical architectural shapes, adorned with pediments and columns. A later feature is the skeleton dial on a black, blue or red velvet background. The signature is usually engraved on the movement and/or on a small plaque below the dial. Sometimes Van Ceulen and Pascal add the name ‘Hollandiae’ (from Holland) to the inscription ‘Hagae’ (from The Hague), which demonstrates their clocks were meant to be exported. After 1685 the signature can also be beautifully sawn-out as an arabesque to decorate the clock’s face. This feature can be seen on examples by Van Ceulen, Visbagh and other Hague clock makers, like Laurens van Blade, Bernard van der Cloesen and Johannes Tegelbergh or Joseph Norris, the English clockmaker working for several years in Amsterdam.

Hague clocks were of decisive influence in the development of the English bracket clock and the French pendule religieuse, mainly through the Coster-trainees and mediators John Fromanteel and Nicolas Hanet. The late seventeenth and early eighteenth century English and French pendulum clock highly influenced the later Dutch table clock.

The origin of the longcase clock.
In his catalogue of 1956 Morpurgo writes about what he calls the most noble of horological discussions, namely the origin of the longcase clock. He comments that the Dutch claim this type of clock to have sprung from an English origin, while the English claim it to be from a Dutch one. There is of cause the fact that the London-based clockmaker from Flemish ancestry, Ahasuerus Fromanteel I , send his oldest son John to work for half a year in Coster’s workshop, immediately after the invention of the pendulum clock had been revealed. Within the same year, the Fromanteel workshop in London was producing pendulum clocks and longcase clocks. Some authors also point out the severe ‘Hague style’ of the early English longcase clocks, such as those by Fromanteel. On the other hand, English clockmakers moving to Holland, like Ahasuerus Fromanteel and his two oldest sons (John and Ahashuerus II) or his pupil Joseph Norris could easily have introduced this novelty from their home country. The By the way, Morpurgo (of Italian descent) however concludes his remarks with the view that the longcase clock has Italian roots.
The oldest known Dutch longcase clock is signed by the fine instruments maker of the Leyden university, Anthonius Hoevenaer, dated c.1675-1685. (Figs 9-12). (Thus about a quarter of a century later than the oldest known example by A. Fromanteel from c.1660 in the commemorative exhibition ‘Horological Masterworks.’)

fig.9. The earliest known Dutch longcase clock by Anthonius Hoevenaer, 1675-1685. Collection Boerhaave Museum, on loan to the Museum of the Dutch Clock, Zaandam. 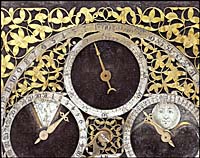 fig. 10. & 11. The longcase clock by Hoevenaer, details of the dials.
(click on image to enlarge) 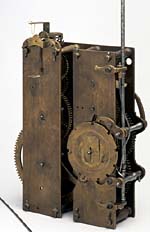 fig. 12. Early Dutch longcase clock by Anthonius Hoevenaer, view of the movement from the back, split plates for

This exquisite slim weight-driven black clock, with a short pendulum, five dials and elaborately ajour-sawn, gilded foliage-decoration is on display in the museum in Zaandam, but is the property of the Boerhaave Museum, which also owns a wall clock by Hoevenaer (more or less similar in construction as the wall clocks by Oosterwijck in Chicago and Thuret in Leyden). The Zaandam Hoevenaer clock (definitively one of my favorites) is one of the earliest examples in a European museum showing hours, minutes, seconds, date and lunar phases.

Like the eighteenth century table or bracket clocks, the early Dutch longcase clocks show much resemblance to their English counterparts, with their cherubim-spandrels surrounding the arcaded dial, on which, as a national feature the Arabic minute-numerals from 20 to 40 are shown upright in stead of upside down. In the eighteenth century the Dutch clockmaker could easily order English parts as components for their stylish timepieces or even have their cases decorated with English marquetry veneer.

Some late seventeenth or early eighteenth century baroque Amsterdam longcase clocks, like examples by Fromanteel and Norris, or Pieter Klock and Steven Huygens, show a carved coif on top of the hood. Later eighteenth century Dutch longcase clocks excel in voluptuous burr walnut or mahogany veneered Louis XV or XVI cases and often popular moving imagery like fishermen and sailing ships automata, musical works or intricate astronomical features such as lunar and tidal indication, or even planetarium or planispherium dials. The museum in Zaandam exhibits a rare longcase clock movement with planetarium-face by Dames Starre of Hoorn, surrounded by depictions of the four elements (on loan from the Boerhaave Museum, which houses also the monumental ‘Leyden Sphere’ by English clockmaker Stephen Tracy), and a complete Amsterdam longcase clock by Gerrit Knip (Figs 13 & 14) with planispherium-face and world time table, an interesting gimmick for the wealthy Amsterdam merchant with stocks in the East- and West Indies Trading Company.