When on 4 July, 1783, the brothers Joseph and Jacques-Etienne Montgolfier floated their first hot air balloon near Annonay in the Ardèche, France nearly went hysterical. These snuff boxes are the result. They are the tangible precipitation of an invention that galvanised the whole of Europe. Such a thing had only been dreamed of: man exploring the skies. The balloon literally opened a third dimension. That is what these boxes show and what makes them such a delightful part of the Zuylenburgh Collection. They depict the beginning of the modern era. 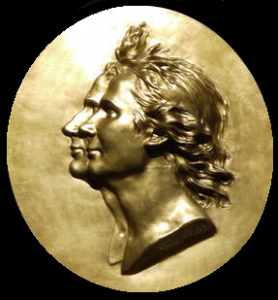 The Montgolfier brothers, plaquette by the famous sculptor Houdon, who also made the well-known bust of Belle van Zuylen 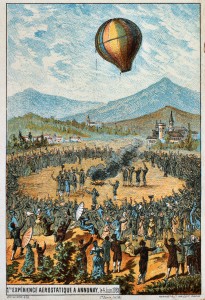 Mid 19th century impression of the first balloon flight at Annonay, from the look of the ladies’ dresses

Tradition has it that the brothers got their idea by hot air filling a drying shirt in front of the chimney. This wasn’t really a global scoop. For centuries the Chinese during their festivities used floating, colourful hot air lanterns. However, these never reached the size of balloons of the Montgolfiers, who had never heard of this custom. Some historians maintain that the invention of the hot air balloon predates the Montgolfier one by 74 years and that the first balloon was made by the Brazilian-Portugeese priest Bartolomeu de Gusmão. A description of this balloon was published in Vienna in 1709. Another description was found in the Vatican in 1917. International recognition this Portuguese precursor never got. The French were adamantely against it and got their way.

Whatever the case, only with the Montgolfiers the balloon started its days of glory. Their first real balloon, a big linen bag, had a covering of paper manufactured by their father Pierre, a rich entrepreneur. His sons’ ballons raised him into the peerage. A winged hot air balloon adorned the new noble crest. A nice additional fact: before the Revolution France’s nobility hardly payed any taxes, an important reason the Revolution started when it did. 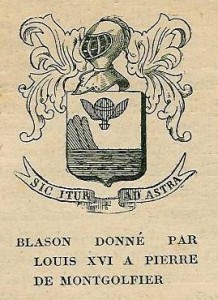 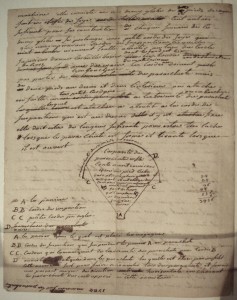 Montgolfier’s description of his invention

The developments around the balloon followed each other at breakneck speed. Only ten days after their first balloon, and this at a time when everything went by coach, the brothers gave their first demonstration in Versailles, in front of the French Royal Court and the French Académie des Sciences. Court and Science reacted with tempestuous enthousiasm. On September 19th the first “animalled” balloon trip followed, with a cockerel, a duck and a sheep as test passengers. At that time there were serious doubts whether living beings could survive such a flight. Could one breathe at such a height and wouldn’t one freeze to death?

About a hundred thousand people watched, including the whole royal family. The balloon was named after the French queen Marie-Antoinette, its colour royal blue and it was adorned with French lilies and golden suns. A strong gust of wind teared the covering, the balloon crashed after a trip of 3,5 kilometers. The cockerel and the duck were found hiding under some shrubs. The sheep was eating the straw that produced the hot air when burning. It was honoured by the name Montauciel, Sky Climber, and was carried around in triumph. As its reward it was allowed to live in the Ménagerie du Roi, the royal zoo, and this for the rest of its life. On October 15th, 1783, the first human flight followed, with Jean-François Pilâtre de Rozier, an adventurous physicist, who later died during an attempt to cross the Channel in a balloon. During this first flight, the ballon was still attached to the ground by a rope. November 21st was the day of the first real free flight, with again Pilâtre de Rozier, accompanied by the marquis François-Laurent d’Arlandes, an ambitious major in the French army.

Ten days later, on December 1st, 1783, the first hydrogen balloon took off, La Charlière, flown by Jacques Charles and Nicolas-Louis Robert. Half of Paris watched it taking off. In 2 hours and 5 minutes they covered a distance of 36 kilometers, faster than a horse. Jacques Charles immediately boarded another balloon, alone this time, and reached a height of 3000 meters. Hydrogen was already discovered in 1671 by the Irish-English chemist Robert Boyle. In 1766 followed its description by the English scientist Henry Cavendish and a few years later the great French chemist Antoine Lavoisier gave it its definive name hydrogenium. Lavopisier also developed a new and much better way to make the gas. With the possibility of flying balloons the interest in its manufacturing grew very rapidly.

Hydrogen balloons soon overtook hot air balloons, partly because the French gouvernement appointed a firm believer in hydrogen as the director of its balloon progamme. A little more than a year later, on January 7th, 1785, a hydrogen balloon was the first to croass the Channel from England to France. On board were Jean-Pierre Blanchard and the Boston surgeon and scientist dr. John Jeffries. Jeffries already had some experience with this new mode of transport. In 1784 he did meteorological observations in a balloon high above London. During this flight he also dropped a letter, the first air mail. The letter can still be viewed at Amherst College in the United States. Their Dover to Calis trip was fraught with dangers. In sight of the French coast the balloon quickly started to loose height. Its two passengers first threw out all the ballast and luggage, then mos of their clothes and as a last measure emptied their bladders and bowels and so safely reached France. Jeffries solemny promised never to enter a balloon again. In a letter to de British Royal Society he explicitely pointed out the balloon’s major failing, one couldn’t steer it and around the 1820’s balloons faded out of fashion as useless and dangerous contraptions. Only the development of the explosion engine at the end of the 19th century solved the problem of steering, but in favour of the aeroplane. However, dropping things from balloons immediately led to speculations about their possible military use. Napoleon seriously considered this option for the invasion of England, but found the technical difficulties too overwhelming. French efforts after Napoleon’s conquest of Egypt to convince the inhabitants of Cairo of the French superiority with a hot air balloon didn’t succeed either. “A diabolical contraption”, the pious Cairenes called it, pointing to the fire that provided the hot air. They saw it, if need be, as an added proof of French godlessness.

Woman too soon took to the air. The first free ladies flight was by Elisabeth Thible, who in June 1784 entered a balloon in Lyons for the amusement of the visiting Swedish king Gustavus III: straight from the beginning balloon flights were fairground attractions, gathering huge crowds. Balloons are nice and they still are. The balloonomania had many profitable sides. Not only snuff boxes were adorned with balloons, but furniture and whole dinner and tea services were covered with them. Engravers of balloon pictures worked overtime. Neither did one have to wait for the first air disaster. In May 1785 a hot air balloon crashed on the town of Tullamore in the Irish county Offaly. A hundred housed burned down. The crash made its way into the town’s crest, a phenix arising from its ashes 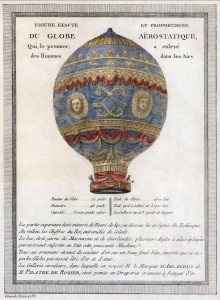 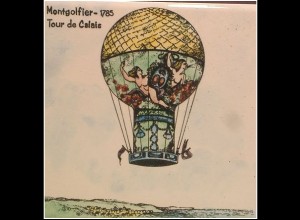 tile celebrating the first balloon flight across the Channel

the first hydrogen balloon ascends at the Palais des Tuileries. The old palace, residence of amongst others Napoleon I and Napoleon III, was destroyed during the Paris Commune of 1871 and was demolished in 1882. There is an extremely slight chance it might be rebuild 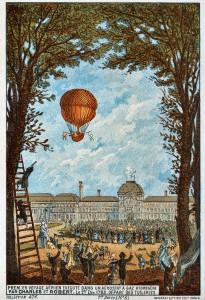